He is here with his documentary film Austerlitz, which premiered last fall and consists of static black-and-white shots analyzing tourist behavior on concentration camp tours. You’d be surprised how many take selfies with the ‘Arbeit Macht Frei’-gate.  His eyes glance over me discerningly as he asks where I’m from. I don’t seem to appear credible enough, or worth revealing information to. As we sit down, I can tell he’s still not convinced he’s at the right interview. As we begin, he mostly tells his ideas to the street through the window behind me, but as my questions attempt to go deeper, his steely gaze gradually redirects to puncture my own. 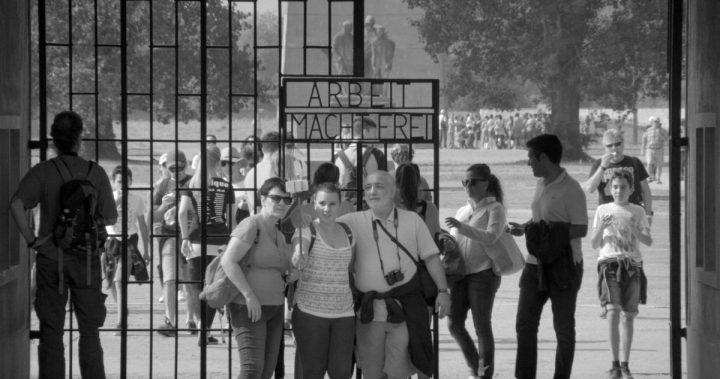 MLP: How did you first conceive of the idea for Austerlitz?
Sergei Loznitsa: It always starts from experience, from an impression which you have from your life, and with me it was the same. When I came for the first time to this kind of memorial in Buchenwald, I got a strong impression from what I saw. After that I decided to visit another camp in Sachsenhausen. The impression got stronger, more and more, and I decided to shoot a film. This is very simple.

Did you have an idea that you used to pitch it to receive funding beforehand, or did you just start filming?
I never pitch ideas. I don’t understand this form of… pitch with whom? What does it mean, “to pitch an idea”? For me, a documentary is a private relationship between you, the camera, and things around you. How is it possible to – even documentary films – how is it possible to pitch? Because you never know what will happen before you start to shoot. This is ridiculous in general for documentary, to predict something. I didn’t pitch the idea. Normally, what I do is just write a few sentences about the topic and also a few sentences about how I will discover that; the method, what kind of instrument I will use, and why. And these kinds of things you can already think about before. After that, I sent my description to different foundations and they supported me…

You can read the full interview on Photogenie

One thought on “An Interview with Director Sergei Loznitsa (Austerlitz, 2016)”

Another best of the decade list! Check out some of our favorite albums from the past ten years, complete with a @spotify playlist! Lists by: @welcometotihuana @langsmonkey @1xferokay @horkelia @maximilienluc
Today is our 1 year instagram anniversary! Mosey on over to ultradogme.com and celebrate with our best of the decade in film lists! Featuring contributions from @welcometotihuana @horkelia @langsmonkey @1xferokay @thebeamcatalogue
Excellent find at Utopia bookstore in Belgrade. Highly recommended if you are ever in town. The store is tiny but its shelves are packed with all kinds of gems. The dude has L'ange on VHS! #avantgarde #cinema #bookstagram #film #localbusiness #belgrade #beograd
New album review by @langsmonkey - 'Phantom Rhythm' by Gong Gong Gong. Available for your reading pleasure, as always, at ultradogme.com
%d bloggers like this: